“…what kind of Wrestling?”

Roman wrestling, as well as various styles of British wrestling from centuries ago, yet has proven extremely effective in various arenas in the modern combat sports scene. Practitioners of the art have competed and won at the highest levels of competition; from UFC, Pride, and Bellator, to the Olympics, Jiu-Jitsu tournaments, and much more. 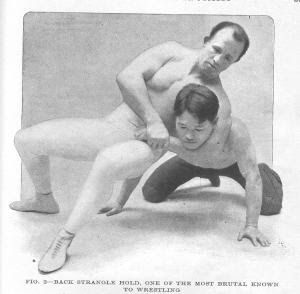 The sport of catch wrestling originated in England several centuries ago with traveling “strong men” who would welcome challenges from local townspeople and farmers in wrestling matches. The champion wrestler – grappling all day long – would need to use any means necessary to defeat the onslaught of opponents trying to conquer him. As such, very simple yet effective techniques, using any means necessary – even “mean” or “dirty” ones – were employed to be as efficient as possible in order to “finish” his opponents.

Fast forward several hundred years to the late 19th century, catch wrestling surged in popularity in the US, becoming the most popular sport among Americans. According to the National Wrestling Hall of Fame, it was the style of wrestling that propelled Abraham Lincoln to over 300 wrestling match victories. Over the years, restrictions in rules eventually morphed the sport into folkstyle and freestyle wrestling – the forms used in scholastic and Olympic arenas, respectively.

However, the sport did not die off entirely. The pure art of catch wrestling was carried on through the 20th century by a relatively small number of athletes, but in recent years has experienced a significant resurgence of interest in the sport.

At a time when grappling schools are popping up on every street corner, many of which are unfortunately becoming watered down by conforming to restrictive competition rules, rather than the “no holds barred” approach in Catch, Catch wrestling stands out as a comprehensive and aggressive form of grappling that ties in well to various combat sports, self-defense, and general physical fitness and well-being.

Stay tuned to this blog to learn more about the history of the sport, famous profiles in Catch Wrestling, and learn about upcoming local events we are hosting.